Details of the recommendation are currently being worked on, according to Adams’ office.

As part of the effort by developer BFC Partners to garner Adams’ support, Rev. Daryl Bloodsaw, pastor of the First Baptist Church of Crown Heights, is scheduled to deliver nearly 400 letters backing the project to Borough Hall on Monday.

At a dramatic press conference in May, joined by Councilmember Laurie Cumbo and other city officials, Adams came out against the development as it stands. The plan, however, is supported by Mayor Bill de Blasio.

Candidates include Democrats Cumbo, who hopes to continue the work she has done over the last three-plus years if given another term by the voters, and Ede Fox, who lost to Cumbo in 2013 but is running again, seizing on community anger over the future of the armory and related issues of affordable housing and gentrification.

Cumbo won in the 2013 primary with 7,561 votes. Olanike Alabi came in second with 5,369 votes and Fox was just behind with 5,340. Cumbo then ran uncontested in the general election, which will not be the case again this year as she is slated to have a Republican opponent and a Green Party opponent.

As Gotham Gazette sought to clarify what campaign help was being provided to Cumbo by City Hall, perhaps blurring or crossing lines meant to separate government and political work, the response was silence. Mayoral spokesperson Eric Phillips refused to comment, as did a spokesperson for Cumbo’s campaign. De Blasio’s own reelection campaign did not respond to a request for comment.

Over the years, the city’s Conflicts of Interest Board has issued numerous advisory opinions on the restrictions on political activity by public servants. Perhaps one of the most pertinent, from 2012, prohibits city employees from working on political campaigns on city time or with city resources.

The Road To City Hall’s Errol Louis (a district 35 resident) hosted Councilmember Laurie Cumbo, Borough President Eric Adams, and neighboring Councilmember Jumaane Williams to talk J’Ouvert and the Bedford-Union Armory deal. Their enthusiasm for the deal was underwhelming (see picture) but each politician endorsed the overall goal of the project without consenting to the deal in its current form, leaving open the likelihood that the mayor and BFC will eventually develop the property. 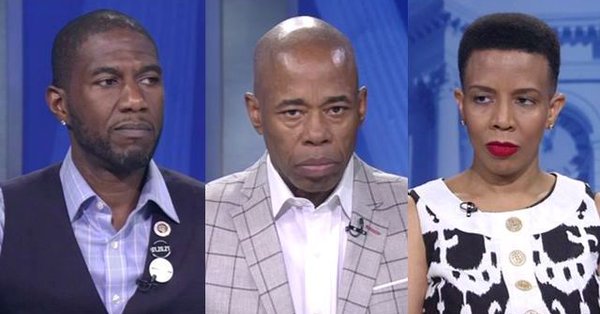 In the segment, Cumbo said, “People were clear, they did not want any sale of the armory, and so we have to hold true to that. We do not want to see any sale of the armory. Right now, out of 330 units of housing, only 18 are affordable to the residents of Crown Heights,” echoing the words of community activists for the first time.

[T]he state senator also doubts that below-market-rate rents could fund the operation of the rec center, noting that area residents would be the first to lose access to the facility if that revenue fails to maintain it.

“So what happens? The rec center loses money,” Hamilton said at the meeting. “So they raise the fees so the people from the community who should have been using it can’t use it.”

What’s the Deal You Want to Kill?

The Bedford-Union Armory in Crown Heights is about to be handed over to a private developer, who wants to build unaffordable housing alongside new sports facilities. We’re fighting to keep our homes in Crown Heights.

What if we just get rid of the luxury condos?

While Councilwoman Laurie Cumbo has voiced opposition to the luxury condo aspect of the project, she may still vote to allow BFC Partners to create unaffordable housing on publicly-owned land for private profit. Luxury rentals also mean displacement in central Brooklyn and the destruction of affordable housing in a city in already in the middle of a housing crisis.